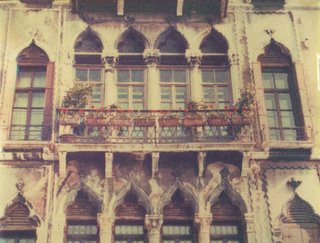 Hello- I hope everyone is enjoying the holidays with friends and family. I am working on some large giclee images for Hemisphere Accent Gallery. The big market show is Jan 18-25th.
Here's a polaroid transfer that has been blown up to 30 x 40 inches.
No comments:

To better manage images, I am putting together a storefront - it's a work in progress so do check back. You can find the link to the Right, or click here.
No comments:

This is a new little watercolor study that is on
ebay at the moment.
2 comments:

We are moving to Dallas

(actually artwork is moving. . .) I just got the word.
Beginning Dec 1st or so, my artwork will be represented
in the Hemisphere Gallery , 9th floor, Dallas World Trade Center.
No comments:

Zazzle does free shipping from time to time. Until
October 30th, shipping is free if you use the code "Zazzlefs1005".
You can find the link to the right.
No comments:

This is as abstract as it gets. Yupo, being synthetic,
allows the colors to bleed together
and create interesting patterns and colors.
No comments:

here's another iris painting on yupo paper.
It is varnished with acrylic varnish and
is 5 x 7 inches.
No comments:

These two paintings are in the members exhibition
at Quinlan Visual Arts Center in Gainesville, Ga. The show
opens Oct6 and runs through Nov 27th.
No comments:

Here is a new little painting that I
finished last evening- find it here on ebay
No comments: 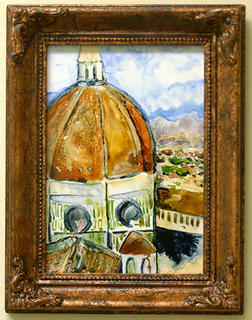 This is my latest mini- painting. It is available on ebay.
No comments: 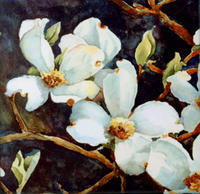 A dogwood coaster set listed on Ebay for Best Friends Animal Society. Best Friends is helping with the rescue of pets following Katrina. You can read more at their website. The vet school at LSU at Baton Rouge is set up as an animal shelter. They have a fund you can donate to at their website.

You can find the coasters on ebay by clicking here- dogwood coasters.
No comments:

Georgia has a specialized license plate that pays to spay and neuter dogs and cats. They are searching for a new design. Here's the old design. . .
No comments: 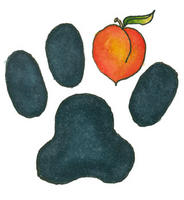 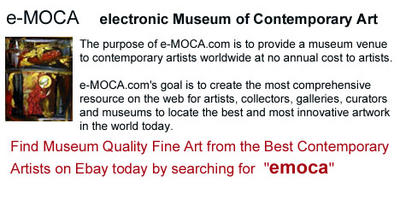 I just discovered that Stella (the links at the bottom right) has listed a miniature portrait of Judy on Ebay. Click here to see Judy's portrait.

Stella was trying to slip under the radar on this one and got busted- LOL! All Judy needs at this moment is a diet so NO funds will be going for her care- I am sure Stella can send the proceeds to her favorite charity or shelter on Judy's behalf.
No comments: 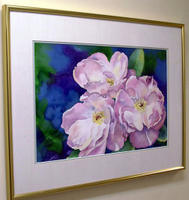 Hi ya'll.
I donated this older painting, titled Biltmore Beauties, as a auction item at a Luau, this past weekend - the luau was a fundraiser for Grace Fund. Sundown Surgery and Grace Fund are two of my favorite animal charities at the UGA teaching hospital. You can learn more by clicking here -Sundown and Grace Fund. You can also read about Grace by clicking here- Grace . It finished at $700 dollars for Grace fund.
No comments:

Has it been a week already? 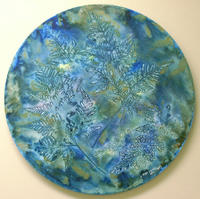 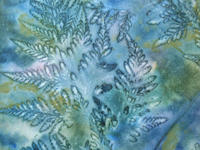 It has been a week since I last posted. Here's an older painting on canvas that is listed on Ebay as a charity auction for Save the Dalmations and other Canine Rescue in California. It ends Sunday night. I dont paint on canvas much. This is sorta a blue abstract with outline of fern leaves.
1 comment: 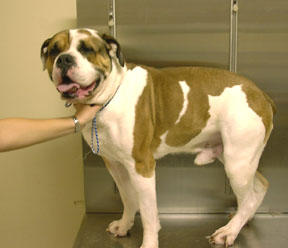 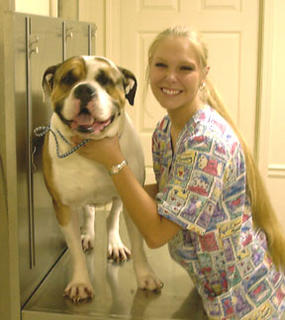 I haven't painted anything this week (so far). I have thought about painting. Maybe that will count. July is sorta crazy around here- lots of people boarding their pets while they are on vacation. July 4th weekend is usually packed. We are like the Inn in Bethlehem- "we have no room"!

This is Tank- he boarded this past weekend. He's a 95 lb. American Bulldog. He's about 3 or 4, I think. His owners breed Bulldogs. They have lots of children too- 8 or 9 under the age of 9 or so (I've lost count!) Why is this important? In November 2003, Tank started getting sick-vomiting and diarrhea. This went on for a few days, we saw him, gave him fluids. He felt better but still wasn't quite right. We radiographed his abdomen. We were suspicious of an intestinal foreign body, but couldn't see it on his radiographs. So off to surgery we go. Guess what we found?

Tank had eaten one of the kid's audio cassette tapes. The plastic had broken in pieces and the tape had unraveled. Part of it was in his stomach and the rest was trailing down the first part of the intestine. Strings, dental floss,neting off a turkey, socks, panty hose- anything stringey,long and linear is the worst thing to eat. Thread can actually cut the intestine- then you have a real mess.
We saved him and so far (thankfully, knock on wood) he doesn't seem to have quite the appreciation for music that he ONCE did!
2 comments:

Cobwebs on my blog 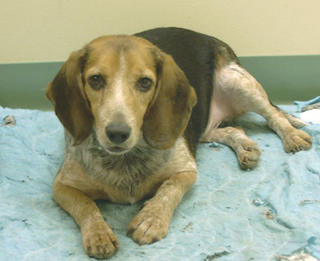 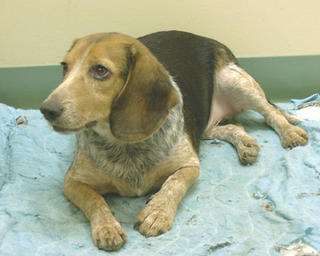 Been awhile since I have been around these parts! LOL- I actually forgot that I had started a post and blog- now there are cobwebs and dust all over it. I will try to clean it off and finish.

Btw, here's a photo of Judy- she's a beagle who is in need of a family. She was brought in to be euthanized some time ago when she had the mange. I got it to clear with a bit of TLC and time. She has become quite accustomed to being an office/vet hospital dog- really fond of the airconditioning.
5 comments:

Welcome to my Blog!

Mercy! I cant even finish typing a post before its published! Took me 10 minutes to figure out where and how to edit it. Anyway, this is just being setup- welcome to my blog.
2 comments: