Lucky Had Her Surgery Consult Today

Some of you are familar with Lucky the kitten that I took in on Christmas Eve.  She has been here at the hospital waiting for a surgery consult at the University of Georgia and had that today.  But let me back up and tell you how we got here . . . . . 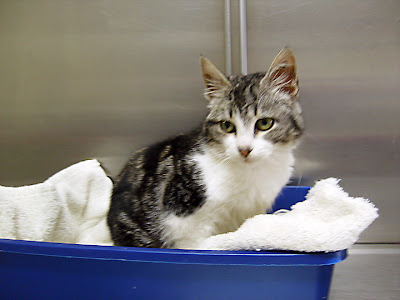 We first saw Lucky back at the end of August with what appeared to be a wound on her tail and some type of wound in her perineal region next to her rectum. Her family thought it was some type of trauma.  Over the few weeks, while Lucky was coming in for her vaccinations, the wound wasn't healing. 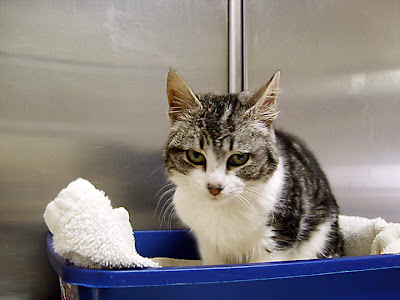 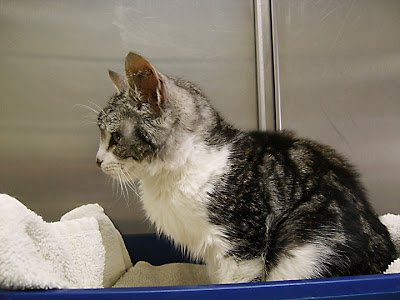 November went by and most of December.  On the 22nd of Dec, Lucky's Mom called and her husband brought Lucky in.  Lucky had weeks worth of poop all over her rear end, flanks, and rear legs.  Once we got her cleaned up the best we could, she appeared to have some type of fistula as she had a vaginal discharge that looked a lot like poop.

In talking with the family, it wasn't looking good for Lucky. Some of the family wanted Lucky euthanized.  Some didn't. And some felt that the most humane thing to do would be to throw her out somewhere.   And it seemed that the dumping her somewhere was going to be her fate.   On Christmas Eve.  With it being 22 degrees outside.  With poop on her rear end.  And it was going to snow the next day.

So I took Lucky in to get her out of harms way.


The Teaching Hospital is on a holiday schedule the week before Christmas until after News Year.  Most of the students are gone, and most of the cases are emergencies only.  Lucky  originally had an appointment last week when the 2nd snow storm hit.  And was rescheduled for today.


Here's a Short Video of her on Flickr.
I think it's in the Movie Dirty Harry,  there's the line,

" Opinions are like ass holes. Everyone Has One."
Well, it seems that Lucky was born with no opinion.  And no ass hole.
"Atresia Ani" is the fancy name for it.  If you insert a thermometer into her rectum, it's like a closed pouch.  And that's where the fistula developed into her vagina.   (I hope no one is about to eat dinner after reading this by the way. . . .)  Rectovaginal Fistula.

The next time you feel like calling someone an AssHole,  take the fancy route and tell them,  "You are so NOT ATRESIA ANI."  By the time they google that, you will have safely left the building.

So, at this point,  Lucky has 2 options.
1. Euthanasia.
2. Surgery to try and repair the fistula.

Surgery Estimate-  $2000-2500.   There are possible complications as even routine surgeries have risk of complications.   Colons don't like surgery.  Surgical sites don't like poop on them.  There is also the risk of nerve damage to her sphincter muscle resulting in fecal incontinence.  But at least I (we, they) tried to give Lucky the best quality of life in the first place.

Now I know that some of you are thinking,  "That sounds like a beautiful case for surgery students to study.  So much better than a routine spay.  Why can't they do it pro-bono or at a really reduced rate?"

And it is a fantastic case.  You just don't see things like this everyday.  But I can't expect the teaching hospital to do the surgery for free.  They are too many expenses involved-  salaries, utilities, medical lucky supplies, etc.   It can't all be covered by tuition alone.  Poor college students pay a lot as it is.  However, sometimes when cases go way over the estimate, the hospital does try to write some or all of that off. So I personally think it all works out in the end.

When I posted the first photos of Lucky of Facebook and Flickr, people offered to donate some funds to help her out, but I had to first find out if surgery was even a possibility.  And it is.  So, the University has set up a fund for her.

It is set up through Sundown Surgery Fund at the University website so any donation is tax deductible.  It is important to note in the Notes or Comments section that the donation is for the Lucky Fund.

If you would like to help with an online donation, here's the link to the page.

If you would prefer to mail in a check, please make the check out to The UGA Foundation for Sundown Surgery and make sure to note For Lucky on the check.  The mailing address is

Veterinary External Affairs Office- Sundown Surgery Fund
501 D.W. Brooks Drive
Athens, GA 30602 USA
I would also appreciate if you would take the time to pass this post around.  Post it on Facebook. Tweet it.  Email it.  Lucky can't have surgery until the funds are raised.   The Foundation Office will let me know when donations come in so that I can share it with you.

Any questions?  Drop me an email at andy@andymathis.com

Oh! the poor little sweetheart, I so want to give her a cuddle. Of course the surgery has to be done to try and give her a better lease of life, which is what she deserves. I'll try my best for her.

How is Lucky doing? Would it be possible to get an update on how she's doing?

Martha, I know you got an update via email so ignore this, but for anyone else who is reading this post and wondering about updates, I update a blog post every few days.

You can find those, starting with the most recent by searching for Lucky at the very top of my blog or by clicking on this link.

Comments
People often ask about donations for the cats. Here's a paypal button if you would like to donate a few bucks- treats for Leon . . . milk replacer or medication for those dumped on the doorstep . . . coffee for me. . .