Mornin' All. Or it was morning when I started this post. Welcome to Monday. It's Halloween week.

How many of y'all have already eaten all the candy and have to go out and buy more? I know y'all are out there. . . .

Here's who came in last week.

Jake came in on Friday, and went home on Saturday. He's about 10 weeks old, a Chihuahua puppy. 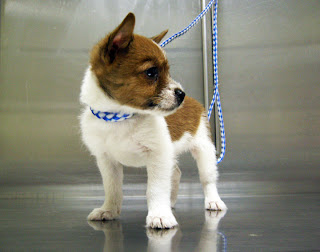 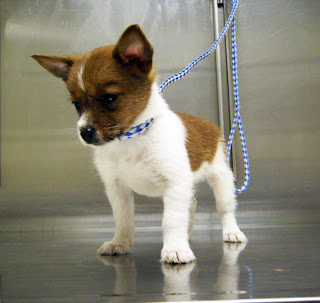 Middle of last week, Bentley had managed to get himself stepped on, but he was fine for the most part. He's a mix between Jack Russell Terriorist and a Pomeranian, I think, his owner said.
Cute, cute, cute.

Then Miss Yoda came back in on Friday for a follow up vaccination. She's growing and only wanted to do her own thing and get off the table. We were having enough trouble herding one cat, much less how it would have been to try herd a bunch of cats.

She was wearing a new blinged out, too big for her, Pink collar. She wasn't too amused, and it must have been new I assume, from the way she kept scratching and chewing at it.

Her eyes have changed color a little. They are now more green. The last time I saw them, they had turned more of a grey color. Her adult haircoat is growing in as well. Looks like she's going to have longer hair.

Fleas Can Be Fatal

This is probably going to be a long post. (Apologies, in advance, but it needs to be discussed)

I do like sharing photos and stories with you.  Some topics are happy, and some a little less happy, put it that way.  I don't post anything that I wouldn't tell a client in person. I don't post to embarrass anyone. I don't mention clients names, although some of my readers do recognize the patients, and know who they belong too.  And when I discuss things like parvo virus, as a reader, it's easy to point a finger and say, "that dog should have been vaccinated".  And I agree.  It sort of indirectly, unintentionally,  reflects poorly on the owner. If I had my way, every dog would get vaccinated, but I am up against a feed store, a rabies clinic,  the pound, and a low-cost spay neuter clinic, that rolls into town every 2 weeks, that says otherwise.

The only reason that I post these stories in the first place is that if I can keep another pet from suffering the same mistake, then it's worth it.  As a reader, what you don't realize is that these posts about things like parvo show up really high in google, and on youtube. A little client pet educational information never hurt anyone.  So that is my intent. Not to pass judgment on any one person or embarrass anyone.   Does that make sense?  Okay then.

This is the story of  Belle. A 4 year old Himalayan cat that came in on Thursday. 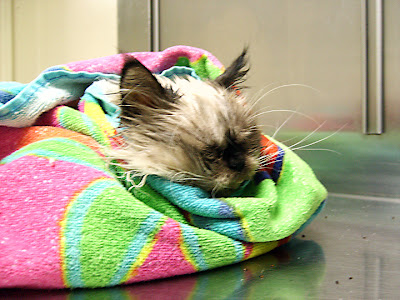 Literally knocking on death's door.  Weighed about 4.5 lbs.  Probably should have weighed 7 pounds or more. Totally inside cat.  I vaccinated her as a kitten and then hadn't seen her again until Thursday.  Someone else spayed her. Not sure when her last checkup was.   Her body temperature was 92.5 degrees.  Normal body temp for a cat is up to 103.  Mucous membranes the color of notebook paper. 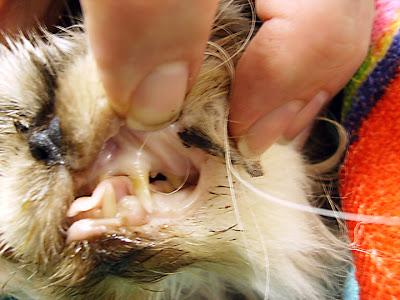 She's in a rather precarious situation.  You are not going to be able to get a catheter in her, without stressing her out.  Which means she crashes then and there.  Sedating her is not an option either.

So I got a capstar down her, sprayed her with flea spray,  gave her a shot of b vitamins, and packed her in hot water bottles, and papoosed her in a towel.  To fumigate and get her temp back up. Or try and get her temperature back up.

The fleas had literally sucked her dry.  You can see the dead ones on the inside of the towel and on the table.  The white things on the table that look like grains of salt are flea eggs.  You wouldn't believe how many of those fell off her just in the few minutes she sat on the table. Just loaded. 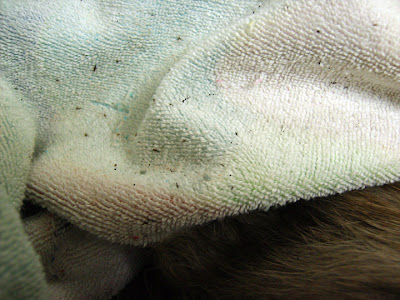 Her only hope is that she can hang on for 2-3 days to let her blood levels build back up.  She made it through Thursday night.  Her temperature was still low on Friday morning, but I did get it back up to 101 by lunchtime.  I was hopeful.  I got a little nutrical in her, gave her a little bit of fluids under her skin. Not too much to dilute out her blood volume further.

She was sleeping with hot water bottles, wrapped up in a towel, and under a heat lamp. When I went to check on her about 3:30 pm,  she had passed away.  It was all just too much for her to try and hang on.

There is a small possibility that Belle has some underlying medical condition that made her weak or anemic in the first place, and the fleas didn't help any.  Without a blood sample to test, or possibly an autopsy, we'll never know.  But that was a lot of fleas, flea eggs, and flea dirt on her.  And  "flea dirt" as it is called is just flea poop made up of digested blood from her.


The owner has another cat and 2 dogs in the house. She said she has been using Frontline on all of them.  I have no way to verify what she was exactly using. Or what she had sprayed the house with. I did send her home with Siphotrol to spray the floors and upholstery with.  It has much more active ingredients than most store brand of flea sprays.  If she has been treating the other pets, and spraying the house in the past few months, I bet she has spent way more than she would have if she had purchased the "good stuff" in the beginning.   I also bet if she had called me a week, maybe 2 weeks ago, she would still have her cat, and not be having to get her cremated.  But that is hindsight, isn't it.


No dog or cat should have to live with fleas. Certainly not die from them.

Often people will say, "Oh, my cats stay inside, they don't need flea stuff."  And this is true, up to a point, they are less exposed compared to an outdoor cat. In the beginning anyway.  But if a flea problem ever develops, and it can happen very fast without one realizing it,  the indoor cat is at a disadvantage.  The outdoor cat can move. If there are fleas in the barn, the outdoor cat can go elsewhere.  The inside cat can't get away from them.

Just a few notes about flea products. Read the label and know what you are buying. Or better yet, ask your vet.  I know from experience that when people complain about a flea problem, and I ask what they are using, the answer is usually a flea collar.  Or flea shampoo.   Well, there you go. Problem solved. That'll be $85 for the consult.

A flea problem isn't about the fleas that you can see. It's about the flea eggs and larval stages that you can't see. For every flea one sees, there are 10 more waiting to hatch. The flea you see on Thursday probably isn't the same one you saw on Tuesday.   Flea medications don't repel fleas as if your dog or cat lives in a bubble.  Fleas hatch and have to get on the dog or cat long enough to absorb the stuff. Treating the carpets, upholstery, bedding helps too.

Many of the over the counter flea products for dogs contain permethrin. You can't put permethrin on a cat.  Or you shouldn't as it is toxic to cats- make them seizure or have uncontrolable twitches. I see that more than I would like to.

One ingredient in some flea medications is methoprene.  Methoprene is a insect growth regulator. It is supposed to help keep flea eggs from hatching.  I have seen some OTC cat flea medications that only contains methoprene.  It doesn't actutally kill anything.  (And they wonder why they have a flea problem . . . ) Sometimes it's combined with something to kill fleas.  Like Frontline plus.  And that combination is fine.  Personal opinion though, is that Frontline Plus doesn't kill fleas any faster than Frontline, (that ingredient is the same in both).  So I don't think the "plus" is worth the extra money that it costs. If you really want something to keep flea eggs from hatching, look for an ingredient called Lufenuron.  It's in a product called Program for Dogs and Cats. (I actually have it compounded into dog's heartworm medication saving a client money).


Thanks for reading to the end of the ridiculously long post. I hope you learned something and that it helps to improve your pet's quality of life.  I hope I never see a cat, or dog, in Belle's situation again.
8 comments: 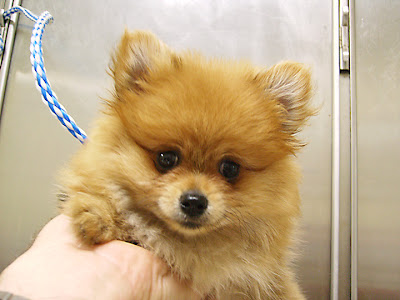 This is Rowan and Gypsy.  They look like pit bulls mixed with something else.  Pointy ears but rather long noses.  They also don't weigh very much, about 10 lbs.  so probably not a lab mix. 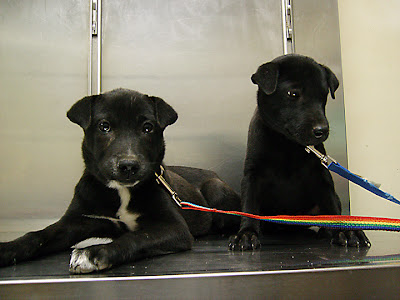 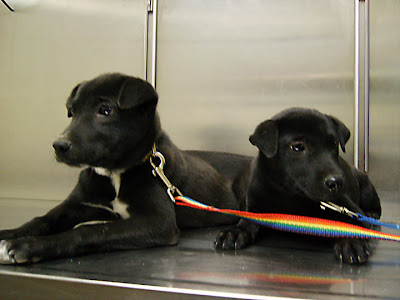 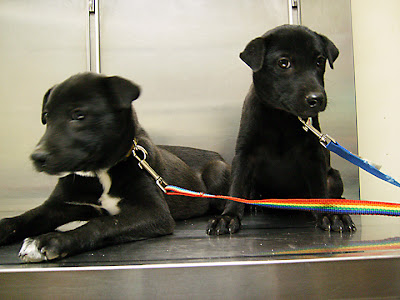 The owners found(caught) one when they spotted them on a dirt road.  It took a few more days of coaxing to get their hands on the 2nd one.

Here's a short video. One had the hiccups.

This video stumbled across my email and I thought it was worth sharing. (spoiler alert- you'll probably need a tissue).   There is also an art auction at the best friends site that starts today. Paintings done by the animal residents. Literally.


I didn't realize, or had maybe forgotten, that Best Friends videos are on Youtube.  You might want to check those out as well-  Go to this Link.

To find out more about the online art auction, here's a link to the Best Friends website.


Have a nice weekend.  I am off to a family reunion at my Grandparents old farmplace. I'll be sure to eat cake for everybody . . . .
No comments:

He's like a newspaper.  Black and White and Read (Red) All Over.   *smirk* 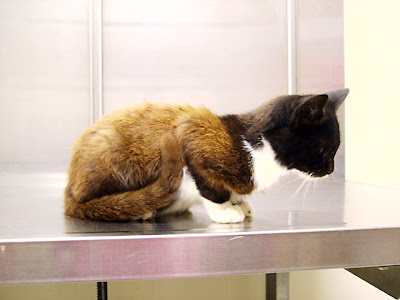 Y'all are probably too young to remember that joke. 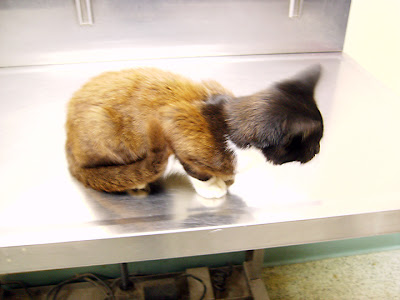 This is BW.  Short for Black and White. He was in today for his second round of booster shots.  He was a stray that showed up at his owner's house. He's about 5-6 months old.  And I do believe, he is redder than he was 3 weeks ago.

Perhaps he's been spending just a little too much time sunning himself and lounging in the neighbor's hot tub. Chlorine can be so damaging to one's hair . . . .

I should win a Nobel Prize or something. . . Demodex

Yes, that's right. A Nobel Prize for Medical Health Technology or something. Based on my Discovery.

I was surprised my little point and shoot digital camera would take photos of radiographs, in a darkened room, when I discovered that a few years ago.  But when Sparky was in today, I discovered it would shoot pics from the eyepiece of the microscope.   Kewl. 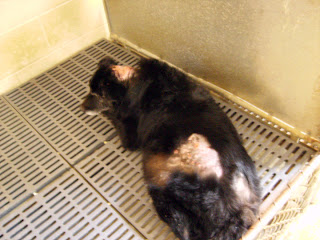 Above is a bad photo of Sparky.  She's 14 and chewing at her skin really bad so it's getting infected.
So we did a skin scraping and found Demodex mites there.  That's what I was able to photograph under the microscope.  The red arrows point to the Demodectic mites.  They are the clear, sort of cigar shaped things with little legs that looks like rings around part of their body. 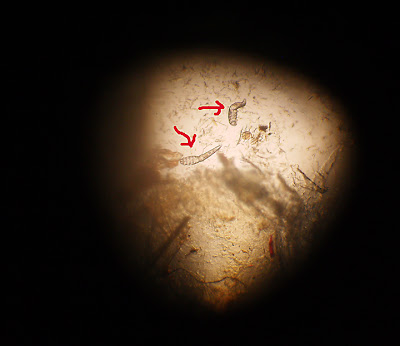 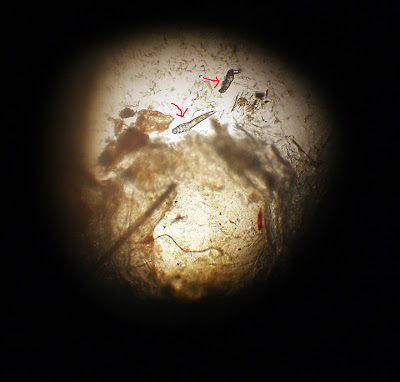 Aint that just the Koolest?  Totally made my day. Have a good weekend everyone.
2 comments: