Carly, Bailey, and Your Opinion is Requested.

This is Carly.  She was in the other day for a haircut and a puppy shot.  She was surprising good for her first haircut as most puppies jump around, acting the fool, until the realize that the buzzing clippers aren't all that scary. 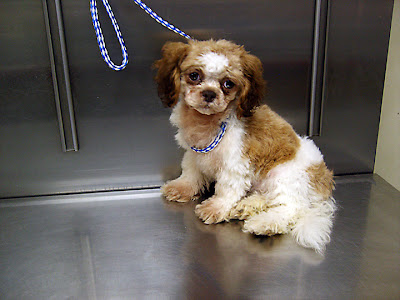 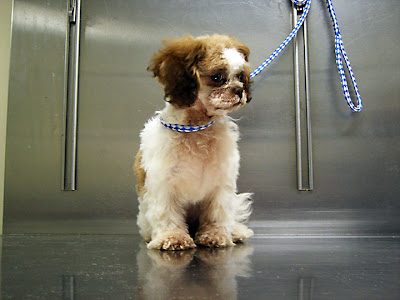 The next Beast is Bailey.  She's a 4 month old Lab who came in the other day.


The camera batteries died rather quickly, so I only got this short video of her.  She got a puppy vaccine but she originally came in because she got bug bit on her face by something, (bee, bug, spider, etc.).  You can't see it very well but her left eye is swollen, almost closed, along with the left side of her face.  We got her some Benadryl and she was fine.   We did get a puppy shot in her too.  Getting bug bit might have saved her life.  She was already way behind on her puppy vaccinations, and we've already seen our first parvo puppy this winter.   A 7 month old Bulldog mix died last week with it.

He had received one vaccination from the feedstore.  It's very disheartening to know parvo puppies have to suffer unnecessarily like they do, or die, when it's easy to prevent, not to mention a hell of a lot cheaper, than to try and treat it.    But such is the reality when people rely on the feedstore, a yearly rabies clinic, and the spay- neuter clinic for  their veterinary care.


And now for my question-
What do people think of crowd sourcing fundraising sites?  Sites like KickStarter.com, ChipIn.com,  IndieGoGo.com, Profounder, or CrowdRise?   Any experiences with them?

The reason I ask, I have been secretly wishing for a class 4 therapy laser.  Familiar with those?  They have been used longer in human medicine than veterinary medicine.  Chiropractors, Physical Therapists, Sports Medicine specialist use them for rehabilitation.   They are a little different than a surgical laser that is used for tissue cutting.  Surgical lasers are great for surgery- no bleeding, less pain and swelling, etc.  Therapy lasers use a different wavelength of light than surgical lasers.   They are good for degenerative joint diseases, pain management, wounds that won't heal, fractures that are slow to heal-  really anything where it is desirable to reduce swelling, pain, inflammation, and stimulate collagen-   hot spots, lick granulomas, stomatitis, herniated disks and spinal injuries, etc.  I am probably going to get an appointment for Maybelline with a hospital that is about 40 miles away in Anderson, SC. To see if the treatments help her mobility.

If you want to read more about laser therapy, search for k-laser usa,  companion therapy lasers, or litecure.com.  You can also find videos online on Youtube.

I first learned about therapy lasers 3-4 years ago.  And I think it is one of those things, that one would use, if they had it.  The case studies are impressive.  Jethro has his neck lasered twice when it seemed to be bothering him from his cancer.   The two treatments might have helped some, but he had worse problems to deal with so he only got 2 treatments.

The problem is that lasers aren't cheap.  And since they are rather new and everybody loves the one they have, you can't find them used or refurbished.   The surgical lasers run about 30 thousand dollars new.  You can find them used and refurbished since they have been around a bit longer.   Therapy lasers cost a little less but they are still expensive-  16-17 thousand.

And with the economy what it is at this time, I don't want to deal with an equipment payment or lease without knowing if that equipment can pay for itself in such a small community.  Large metropolitan area wouldn't have such an issue.    Arthritic patients would require a series of 6 treatments and then maybe only a monthly treatment after that.

The reason this comes up again now, is that  I have an older cat patient who is a little gimpy in his rear legs.  He had a couple of treatments when he got sick while the couple was on vacation in Florida.  And his owners  could really tell a difference in how he was moving afterwards.

So, I am back to looking at laser therapy.  Using a program like kickstarter would fund the equipment ahead of time, without going down the traditional route of a lease or a bank loan.   (Kickstarter is actually for creative projects, so this might not qualify for them, although in my case, it's sort of a hybrid between business and art in how it would be stuctured.)

I guess what I like about Kickstart is that it's an "all or none" approach.  I think the limit is 90 days, so if the goal isn't met, no money is exchanged.  The fees and credit card fees would be similar to what a bank loan would charge for an interest rate.  I can get creative with incentive packages.  For local pet clients, it might be a series of treatment or other veterinary services.  For art patrons it could be packages of gift items, original paintings, reproductions, etc.

Leave me your thoughts or comments below.  Also if you have any experience or comments about laser therapy in pets, leave those too.  Thanks.
10 comments:

Where Dat Bus Be?

Well, today is the day.  In about an hour and a half,  Princess will be headed on her way to the hippest and hottest (kewlest) place on the East Coast. Miami Beach.  Where the young and beautiful people live.  She might even meet a Kardashian, Ryan Seacrest, or Diddy.


She's got her luggage packed and ready to go. 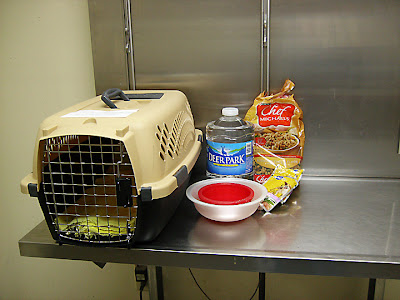 All right, Mr. Chauffeur Man. Now, where you be? 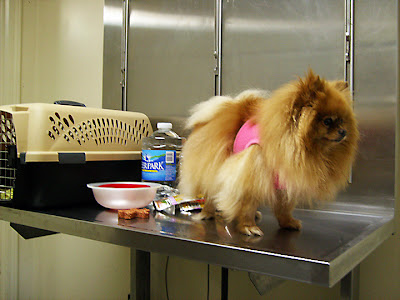 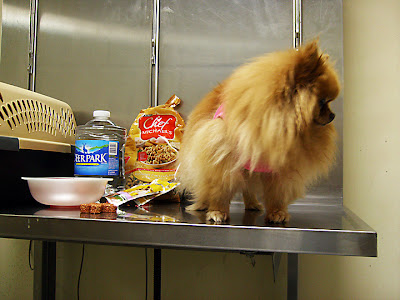 Unfortunately though, there was no Limousine service to Miami.  Or First Class Airline Service. Or no service that anyone offered to pay for, put it that way.  So Princess will be styling and profiling, hitching along, in a semi-truck hauling granite.   It's a glamorous life, let me tell ya.  Like Fergie sings, G-L-A-M-O-R-OUS.  Glamorous. 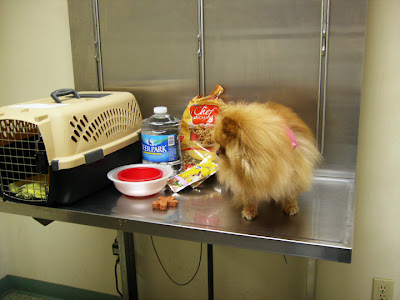 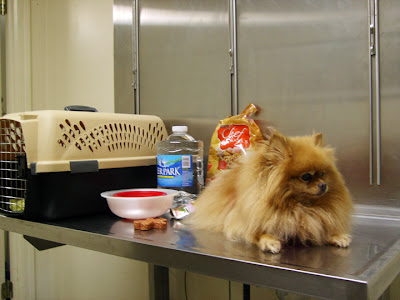 So, if you happen to see a big rig driver, somewhere between here and South Florida, walking a fluffy, prissy little dog, in a pink halter top (the dog, not the driver) , don't be so judgmental.
That's just Princess. Safe travels to you, Girlfriend.

PS- If you recall,  the owner of Princess  got moved to an assisted care facility, a few weeks ago, in Miami.  This will be the first time she has seen her in about a month.  She did call last week to check on her. She sounded good on the phone.  Her daughter called today,  and said that every time the doorbell rings at the facility, her owner hopes it's Princess.  Since I told her last week, she would be arriving this week.

So I am sure she'll be tickled to see her.  They might have to give her oxygen or something. . .  dart her with a tranquilizer gun, etc.  (not princess, her owner)
4 comments:

It's November- We don't need no flea stuff.

Right? Now that the chill is in the air (exluding those reading from the Southern Hemisphere), that's what you are thinking, right?


Let's ask Sasha.  and see what she says about no flea stuff. Or flea medication from the Wal-Mart. (Which is what she was using.) 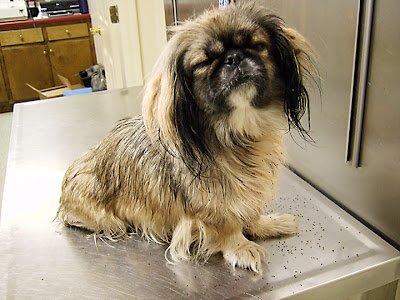 Sasha is a 3 year old Pekingese who came in a few minutes ago.  She was itchy and ADR (ain't doing right).   Okay.   A little closer look,  and one can see why she ain't doing right. 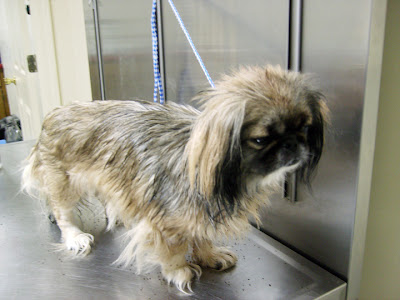 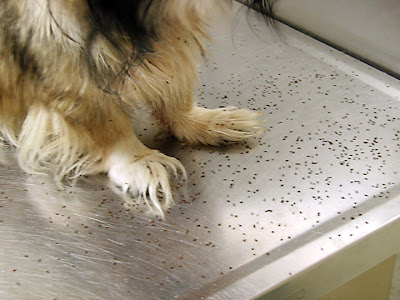 She was well on her way to the same fate as Belle, the little cat, you saw 2 weeks ago.  She's a little anemic, but not to the degree that Belle was. It helps that she is a little larger (more blood volume). 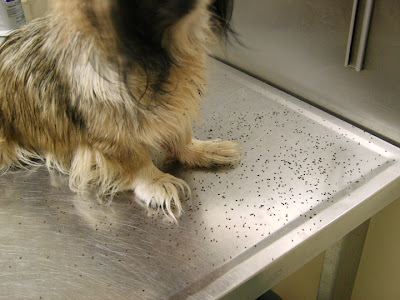 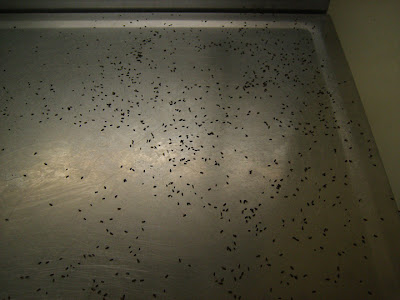 Her owner was just mortified when she saw the amounts of fleas that fell off.  I was a little surprised as well.  She mentioned something about photos, and I chuckled a little and told her, I don't take photos to turn people in to the SPCA or anything.  I take photos and share them so hopefully they might help another pet and keep them from suffering the same problem.  No one believes me when I tell them fleas can be a problem.  People have to see photos.         No worries. No one is going to jail.
So what does Sasha say about her flea medication?   It looks like that Walmart stuff is working well. . . .it looks very effective. . .  you probably could skip a month or two.
Sasha says , "No, not working too great at all."  (that's a big ass negatory, in case you are wondering)
Tonight is going to be the first night she's been able to sleep without creatures biting her. . . and if you have ever been bitten by fleas, you know they are not painless. Not to mention just annoying.
(PS-  Turkey/Bobby left onTuesday with his new owner, in case you were wondering.  I haven't heard back from him, so he must be getting along splendidly with the other dogs.)
4 comments:

Turkey, as you recall, is back up for adoption on Petfinder. His Foster Mom has had to move to an assisted care facility in Miami.   Princess, her Pomeranian, can move down there if I can find transportation for her.

I shot a new video of Turkey last week.