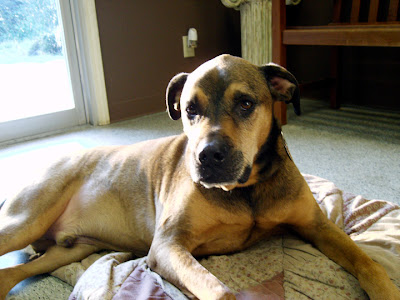 Ya'll have seen photos of my dog, Jethro. He's a mutt- boxer-hound dog? something mix. He's about 9 1/2 years old. He looks like a Jethro. And he sort of acts like a Jethro.

Not as old as dirt. But not a spring chicken either. I acquired him when he was about 6 months old. He had just gotten over parvo.


Here he is with ringworm on his lip. I called him Syphilis Lip for a few days. 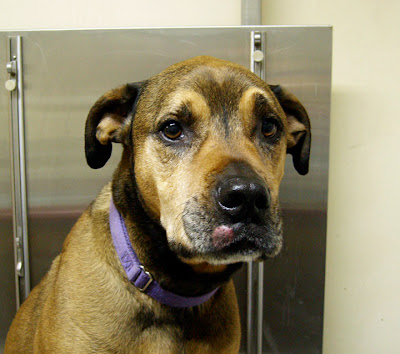 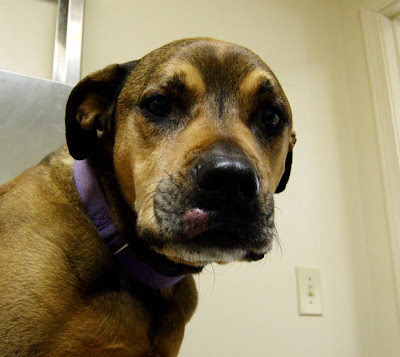 For the last few months, he's had to go outside more frequently to urinate. I could let him out late at night, and he'd be fine till the morning. Or I would have to get up a little earlier to let him out to pee-pee. It was as if his bladder was filling up too quickly, or he was getting the urge to go more frequently. And straining to urinate a little, like something is restricting something.

So I thought, Oh No. Here we go. Could be diabetic. Could be a problem with his kidneys.
His bloodwork was all normal. His urine was concentrated normally. No blood in his urine.

It hasn't gotten any better. We shot radiographs today. Can't see much on them. Most bladder stones are radioopqaque, being made of Calcium and phosphorus. Others are translucent and won't show up on radiograph, but will on an ultrasound. 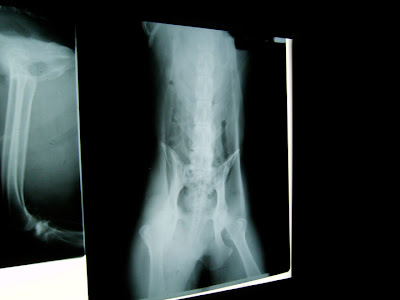 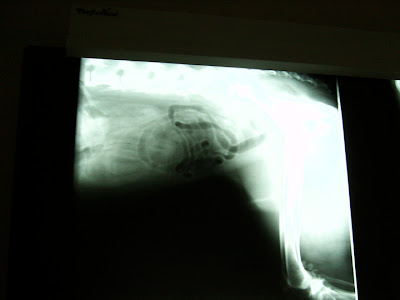 So, he has an appointment on Thursday to have his bladder and prostate ultrasounded. And if needed, a biopsy. Dogs can get prostate cancer and bladder cancer, just like people.

So the next question, how to pay for this? I had rather NOT put it on a credit card with 20% interest, if it can be helped. So I are having a special art sale. For Jethro. Several of my small daily paintings are framed and for sale. They are framed in really nice ornate frames. The frames would normally retail for around $90-100. Unframed originals generally sell for $95-100. And the framed ones are priced at $220.

So, if there was one that you really liked when you saw it the first time around, now is the time to grab it. The subjects vary- florals, fruit still lifes, one or two cats, and one or two dogs.
I was debating about listing them in my store, with a discount code, but I think it might be easier to post them here on my blog, starting tomorrow with a paypal button.

They are too big for a priority shipping box, so I'll have to get other boxes to ship them in. I'm guessing they will cost about $20 to ship. The frames are wood, but they aren't terribly heavy. I will probably weigh one before tomorrow. I'll show a photo of the frames as well, if you don't remember what they looked like.

So check back tomorrow and I'll list some with a paypal button. And I probably list more on Wednesday and throughout the week as well.

Came over from Casto Creations. Saying a prayer for Jethro!

Andy,
I wish we were closer - Kevin could do the ultrasound and biopsy for you at no cost - he usually does work for other vets at no cost because his practice is a referral only practice - all he usually charges is what the pathologist charges him to read out the biopsies. Let us know what you find out about Jethro. I hope that he will be okay.
Linda

Why thanks Linda Sue,
That is nice of you to offer, but I wouldn't expect anyone to do a procedure for free. Ultrasound machines aren't cheap, and neither is salaries, overhead, taxes, blah, blah, blah, etc.

It's nice that he is able to do that for your referral offices. I am sure they appreciate it more than you know.


Thanks for everyone's good thoughts for Jethro. Maybe it's nothing. And then I can quit worrying about it.

Andy, I hope that Jethro is okay. Let us know, ok?
Ellie

Comments
People often ask about donations for the cats. Here's a paypal button if you would like to donate a few bucks- treats for Leon . . . milk replacer or medication for those dumped on the doorstep . . . coffee for me. . .