Bone Cancer and Chemo- Would you consider it for your pet?

I wanted to share these photos from last week, and ask a question concerning chemotherapy in pets.

First on a happy note, Look who returned this week for their puppy vaccination.
Cujo. Can you tell he's growing from the photo? The first photo is from 4 weeks ago. The second one is from last Monday. 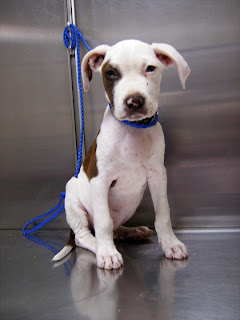 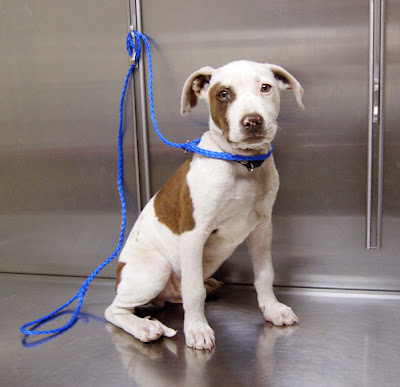 Now, here's my question. Last week I had to euthanize a 9 1/2 year old German Shepherd patient with bone cancer in her forelimb. She weighed over 100 lbs. 10 years old for a dog that big is about the human equivalent of 78 years old. Just for reference.

She was lame last December. We put her on arhritis medications for a few days-weeks, but that didn't seem to give her much relief. So we shot a radiograph (an x-ray). You could see areas of bone missing, which puts bone cancer on top of the list of possibilities. There was a little swelling around her joint but not terribly noticeable.

So, I sent her and rads to an orthopedic surgeon, since they deal with these cases more than I do . She needed a bone biopsy to confirm the lesion as osteosarcoma, but since the prognosis wasn't very good, her owners decided to try and make her comfortable for as long as possible.

For a human, that doesn't sound like very long. For a large dog, a year is relatively longer in time reference.

J had been on narcotic pain meds but last week they noticed she seemed more uncomfortable and having way more diffuculty getting around.

I will say this though- I initially wasn't sure how well a 110lb. dog would be able to get around with missing a front leg. The orthopedic surgeon said that they do well since they are already accustomed to walking on 3 legs by avoiding weight bearing on the affected limb.

Here are photos I took of her leg last week. I had not seen J in several months and was expecting the tumor to be larger. There probably was also some metastasis to her lungs, which were still clear on radiographs back in January. 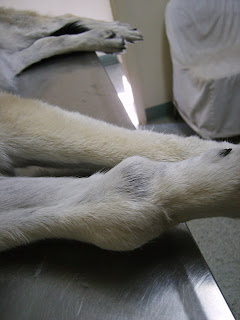 Some owners might not be able to afford surgery, hospitalization, labwork and chemotherapy.
Chemo costs more in big dogs, than little dogs, as the drugs are dosed by weight.

In J's case, I think it was a little of it all- the poor prognosis, the expense, and not wanting to put her through all that.

Years ago, I had another German Shepherd who had lymphosarcoma. She did go through Chemotherapy over 12-15 weeks, and did quite well. She stayed in remission for about a year, and then when the cancer returned her owners opted to euthanize her too. But that is about the extent of practical experience I've had with chemotherapy.

Have any of you had a pet go through Chemotherapy? How did it go? Would you do it again, in hindsight?
3 comments:

Many of you know that a few artists and myself have been advertising in a national art magazine over the past year. We have a new ad coming up in November and we are debuting our first online issue. It was a "little" time consuming to set up the first one, and I am sure I have lots of grammatical errors in it, but it's done, and you get to see it first.


Click on the mini-viewer and you will go to the page. Click on full-screen and you should be able to view it without zooming in and out.

Get your own - Open publication

Enjoy.
If you like what you see, please leave a comment or rate it. I also invite you to leave suggestions or ideas for future issues.
5 comments:

Ellie- Homeless to Happy in less than 7 days

Hello everyone-
As you can see I've been neglecting my blog this week. I wanted to share these photos I snapped today. Some are blurry, I apologize for that. I suspect my digital camera gets lazy about focusing when the batteries get low.

First, remember TarBaby? The 10 year old cat stranded here when her owner had to move to a care facility? And then the couple who purchased the house was going to adopt her and let her move back to "her" house?
Sadly, that all fell through. She's still homeless. 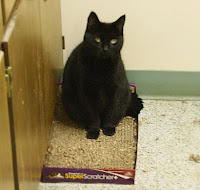 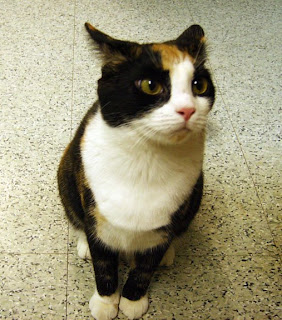 and then you'll recognize Sunshine. Who is "affectionately" referred to, by Maybelline, as the Devil.

Roxie came in for her last puppy shot. 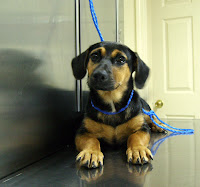 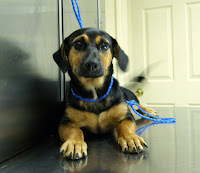 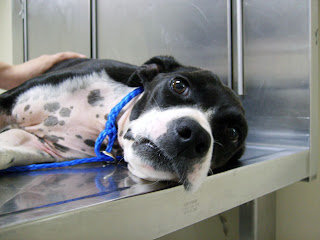 She came in last Monday, looking "possibly with children", sort of wormy, etc. She showed up at the client's house over the weekend. 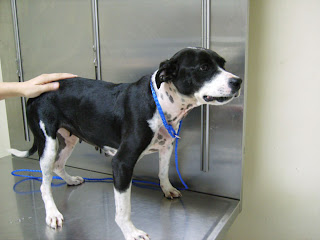 these photos were taken today so she's looking better. On Wednesday of last week she got spayed, and was in today to get the staples out and get a bath.

She would have had 10 puppies before Thanksgiving.

Such a sweet dog, with a sweet personality. 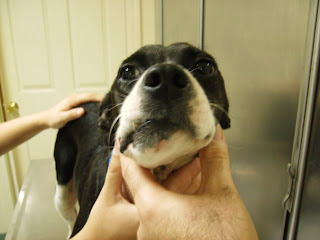 Notice her bottom jaw? Her right side, the left side of your monitor.

Not ever so long ago, her mandible was fractured on that side. It healed but it's a little displaced. 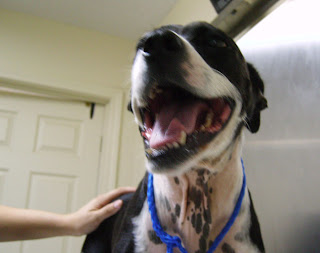 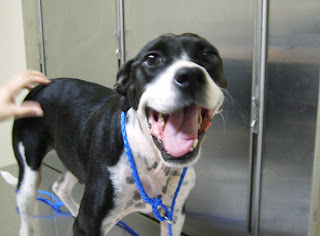 There isn't much can be done with it now. It's healed. But that must have been really, really uncomfortable trying to eat for several weeks while it healed.

Next week or so, she's back to be treated for heartworms.

Remember to spay and neuter those pets. There are enough Ellie Maes (I am certain her middle name is Mae. We are in the South, afterall) running around as it is.
3 comments: